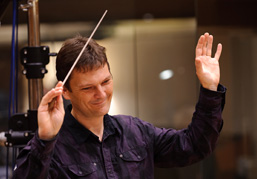 Paul Hoskins is Music Director of Rambert Dance Company. Rambert is now a leading musical force, routinely commissioning music from a wide range of composers, and giving over 50 performances a year with Rambert Orchestra.

As a symphonic conductor, Paul has conducted in every major concert hall in London. He has appeared on Radio 3 with several BBC orchestras, and worked with the City of Birmingham Symphony Orchestra, Britten Sinfonia and Northern Chamber Orchestra, and given concerts in Slovenia, Romania, Germany, Holland, Denmark and the USA.

Paul has conducted The Magic Flute for European Chamber Opera, and Don Giovanni, followed by the world premiere of Stephen McNeff’s opera Clockwork at the Royal Opera House, and rare classical operas by Paisiello and Soler for Bampton Classical Opera at the Buxton Festival. He has assisted at Glyndebourne (Peter Grimes) and English National Opera (The Bitter Tears of Petra von Kant, Elegy for Young Lovers and Caligula).

Paul is an advocate of engaging with audiences young and old, and can regularly be seen talking (and writing) about music and dance for Rambert.