Thanks to the generous support of the Ernest Read Trust, we are delighted to be able to introduce Jaga, our newly appointed Deputy Leader, and Tom, our new Principal 2nd Violin.

As well as welcoming these new section leaders we are regretfully saying goodbye to Lizzie Roberts, who has been leading the 2nd violins for this concert.  Lizzie has an incredibly busy performing career and wants to focus her time on developing this further.

Tom and Jaga will be in touch with their own sections in the next few weeks as they will be commencing their appointments for the March concert. 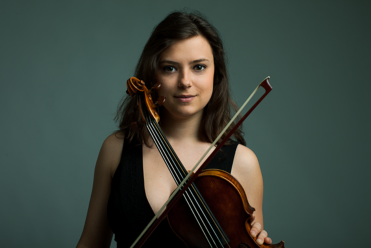 Born in Poland Jaga moved to London to continue her musical studies at Guildhall followed by a Masters at the Royal College of Music.

Jaga has taken part in many workshops and music festivals in Europe and has performed as a soloist and as a chamber musician in Poland, France, Austria, Germany, Russia, Switzerland and the UK.

As well as her versatile music career Jaga also enjoys organising events and is part of the unconducted chamber orchestra Silk Street Sinfonia which she manages and performs with (www.silkstreetsinfonia.com).

Jaga will stand in for John Crawford as Leader if he cannot make a rehearsal and will work with John to lead the first violins.  She will also be responsible for fixing musicians for the First Violin section.

Tom Rowan-Young is studying for a Masters at Guildhall School of Music and Drama, having studied previously at the Royal Northern College of Music and Chetham’s.  He is also an alumnus of the National Youth Orchestra and London Sinfonietta Academy and was accepted onto the Britten-Pears Young Artist programme in 2017.  He is Principal 2nd Violin of the University of London Symphony Orchestra.

In 2013 he founded the Piccadilly Symphony Orchestra; a new orchestra based in Manchester to provide extra performance opportunities for young professionals and conservatoire students. As well as being Leader of the orchestra, Tom was also Artistic Director, fixer and administrator until leaving the orchestra in 2014.

Tom will be responsible for leading the 2nd violins at ERSO, including fixing musicians, and will work closely with John Crawford and the other string section leaders.