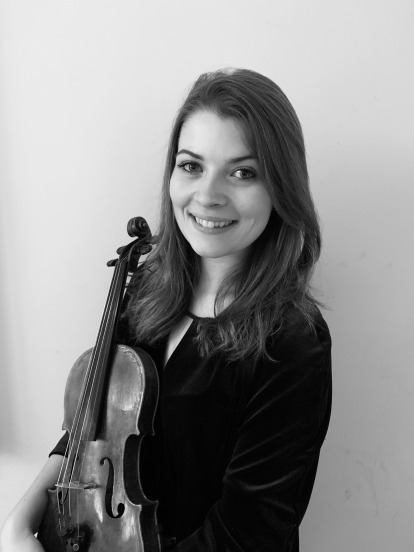 Lucy is a freelance violinist and teacher who graduated in 2018 with a Master of Arts from Trinity Laban Conservatoire of Music and Dance, where she studied with Walter Reiter. She previously attended the University of Birmingham, where she achieved a BMus (Hons) degree, and the Guildhall School of Music and Drama’s Junior department.
As a performer Lucy has played with many different ensembles including the CBSO Youth Orchestra, the Bishops Stortford Sinfonia, and New Sussex Opera Orchestra. Whilst studying she was the leader of the University of Birmingham Philharmonic and Chamber Orchestras, and was a member of the Trinity Laban Symphony Orchestra and Baroque Orchestra. During her training she spent much of her time playing in ensembles and has been lucky to take part in projects alongside musicians from top orchestras such as the CBSO, the Philharmonia and BBC Symphony and Concert Orchestras. As a soloist, Lucy has performed with the University of Birmingham Symphony Orchestra and the Birmingham and Trinity Laban Chamber Orchestras, as well as giving many solo recitals.
Lucy is also passionate about music education. She has built up a teaching practice and takes part in numerous outreach projects bringing music to the wider community. These include projects in hospitals and prisons, and she also gives workshops, demonstrations and concerts in local primary schools.