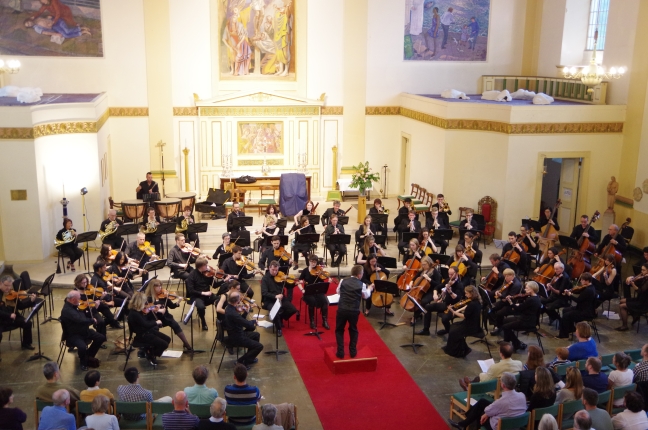 Last night ERSO presented a wonderful Nordic themed concert with Tom Hammond. The rafters of St John’s Church, Waterloo, rang out with the stirring 5th Symphony by Sibelius.  The concert opened with the chance to hear the relatively rarely performed Overture and Dance of the Cockerels from Nielsen’s opera Maskerade and the first half ended with a polished performance of the Grieg Piano Concerto by the exciting, award-winning young soloist Dinara Klinton who is kindly supported by Making Music’s Philip & Dorothy Green Award for Young Concert Artists scheme

The new season will kick off with a romantic programme on 8 October conducted by Samuel Burstin.    We will perform Rachmaninoff  Piano Concerto No. 3 with Ana Sinkovec and Tchaikovsky Symphony No. 6.

Childrens Concerts – The Universe of the Imagination

In November we will hold our annual Children’s Concerts in Kew and Camden, working with Kew Green Preparatory School and the Camden Music Service and conducted by Chris Stark.  The programme will be themed around The Universe of the Imagination and the programme will include Ives’ The Unanswered question, Ravel’s Mother Goose Suite and Milhaud’s Le boeuf sur le toit.  We will be joined by young performers who will sing and play with ERSO.

During November we will also be holding auditions for the ERSO Musician of the Year 2018.  This competition is open to anyone over 18 years of age, of any nationality, who has played in at least concert with ERSO (including the concert on October 8th, 2017 with Samuel Burstin).  Candidates will be asked to perform part of one movement of their chosen concerto at the auditions, which will be accompanied by piano and judged by a panel of ERSO Committee members plus Chris Stark.

Up to 4 semi-finalists will be selected to work on their concerto with ERSO and Peter Stark at an open rehearsal on January 21, 2018.

The winner will have the opportunity to perform their concerto in our 11 February Concert with Peter Stark, which will also include Walton’s Portsmouth Point and Vaughan Williams’ London Symphony.

Behind the Baton – competition for emerging conductors

In March we will hold a Family Concert and the season will conclude with an exciting new concert “Behind the Baton” in which we will showcase emerging young conductors who have been selected as part of our Conductors Competition which will provide a valuable development opportunity to emerging conductors to consolidate and develop conducting skills and rehearsal techniques while extending their knowledge of orchestral repertoire.  The concert will also allow us to illuminate the role of the conductor to the concert audience.